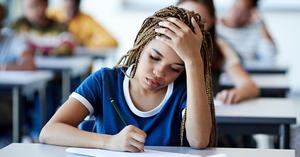 [email protected]
We now have a new reporting system for our students and their families to use to share a concern about another student's well-being. This reporting system is called the Student Care Line.
Over the last several years, the William S. Hart Union High School District has placed an emphasis on student wellness. Knowing that a student who feels emotionally supported is more successful, the District set out to open Wellness Centers on each of our campuses, with the first of those opening in August of 2019. Now the District is looking to expand this effort even further by taking the existing Text-A-Tip line and re-branding it as the new Student Care Line, providing a more comprehensive function.
Text-A-Tip has been used by students, staff and families to report something out of the ordinary. With the goal being “If you see something, say something," Text-A-Tip was there to report if someone was wanting to hurt themselves or others, or even if there was the possibility of someone committing a crime.
The new Student Care Line will be broadened to include mental health and wellness concerns. If you are struggling or know someone who is struggling, the Student Care Line will make early intervention possible, allowing for small problems to be handled before they become big problems.